Van Man Hire is a Sheffield based business that was established in 2008 by Mark Ravenhill.

The business initially took care of small removals and deliveries around the Sheffield area using a standard (3.5 meter internal load length) Long Wheel Based Ford Transit called Morag! 6 months down the line Morag found herself travelling further afield around Barnsley, Rotherham, Chesterfield and Doncaster. This lasted for about 14 months until sadly she could work no longer. The next service and MOT would have been a gigantic bill so she was put into retirement!

That's when Derek came along! An extra-long wheel based high top Mercedes Sprinter! The internal load length in Derek is 4.3m and the extra height means no more banging your head when inside the van loading! The business started to expand and we found ourselves covering removal services even further afield in Huddersfield, Wakefield, Pontefract and Mansfield to name but a few.

Derek worked alone for the next couple of years until 2013 when he was introduced to a new friend, Wilf!

Wilf is an identical extra-long wheel based Mercedes Sprinter as regards to size and capacity, just a bit younger with a newer dashboard with the gearstick attached to it rather than on the floor as was the case in Derek.

With Derek and Wilf now working together side by side, the business has expanded even further with removal adverts spread out to 100 different cities and townships! Places further afield that we now travel too include Leeds, Manchester, Burnley, Nottingham, Bradford, Bolton, Lincoln, Warrington, York, the list goes on and on...!

We have also done work for lots of commercial customers including City Councils, Football Clubs (Barnsley F.C. and Sheffield United F.C.), Dentists, Hospitals including Northern General and Hallamshire in Sheffield, Aldi Stores, Pubs, Clubs, Gyms, Schools, you name it, we've probably moved something for them!

We've even done work for some famous people which include the current chief of the F.A., Greg Dyke, Alistair Watkins, the BBC sports commentator who kindly left us a review on our website and The Everly Pregnant Brothers, a Sheffield band who we have helped move their instruments and equipment to various venues.

And if that isn't enough, Van Man Hire have even been on TV! We've done work for the 60 Minutes Makeover program on ITV helping the tenants move some of their belongings into storage, and we've been on Channel 4's The hoarder from next door show! The guy loved his antiques and his house was overrun with them. We had to take a full van load of boxed up antique items and a few bits of old furniture to the auctioneers to see if he could sell it off!

With a strong young task force on hand to take care of any removal service, we are available to move customers all across the UK. Whether its full house moves, office moves or student moves. We'll get people moved with the minimum of fuss and people are genuinly shocked at how cheap the price comes in at once the work is complete. Compared to other bigger removal companies such as Pickfords and Britannia, Van Man Hire save customers on average around triple of what they would have spent by using the big removal firms. Albeit it, we may need to take care of the removal job in several trips in our van compared to 1 trip in their big vans but for the sake of a few more trips and an extra couple of hours moving; your wallet or purse will thank you no end!

Allow me to introduce myself, my name is Mark Ravenhill, the founder of Van Man Hire. I come from an I.T. background of well over 15 years, hence my experience in web design which has saved me lots of money in development and marketing as I take care of all that myself!

I used to run a property business for 6 years and often hired vans to move furniture between the modest portfolio of 7 properties. I also used to help friends move house and have always kept fit by going to the gym and playing sports since I was 17 years old so have the strength and stamina required in the removals industry. When the recession hit in 2008 I closed down the property business and left my job in I.T. due to a downturn in work for the company I worked for as a consequence to the economic climate. It was then that I decided to do something completely different and set up a Man and Van business. It was only going to be a temporary measure at the beginning whilst I looked for work in I.T. elsewhere but as time went by and the business started to flourish, I decided being my own boss far outweighed that of an employee despite double, even triple the hours you have to put in to try and keep it all going!

During the setting up of Van Man Hire, I enrolled at a local college and gained a Business Management qualification and a Responder First Aid Course which contained the following elements;

Although I thankfully haven't had to deal with any injuries or accidents since the business started, it's always nice to know I have the knowledge to deal with anything that may arise during working with different people and give them a chance should they have a heart attack when I give them their bill at the end of the job (only kidding!)

So, at the end of the day, why should you choose Van Man Hire over all the other Man and Van providers?

We use 2 of the biggest vans in the business. Our vans can fit much more of your belongings into them than you could with some of our competitors vans who use transit vans and those of similar type. This means we can complete your work in less trips, meaning less time taken than the smaller vans so your fee with us will work out cheaper than it would with them, so not only do you save buckets on the bigger removal firms but you also save a few quid from the smaller man and van units too! Bonus!

Both myself and my team are professional to a tee. We are always polite to everyone, the customers, neighbours and so on, and make sure that your items are moved the correct way and strapped securely in the van so that they are not damaged during transit. We've had some horror stories from previous customers telling us of other Man and Van firms who have simply grabbed what they can and slung it in the van any old how, damaging possessions along the way. Not only that, we've had tales of grumpy removal men who moan and really can't be bothered to take your belongings to where they need to go. They've actually left beds and mattresses in front rooms because they haven't wanted to carry things upstairs! There's none of that on my watch! Everything is taken to its rightful place in its new home and we always do it with a smile on our faces and have a friendly chat with all our customers. Customers instantly feel at ease when they start speaking to us and it helps to relieve some of those removal day stresses that everyone experiences.

We treat all of your items as if they were our own. We are careful not to scratch and break things. We secure boxes properly in the van and make sure that any delicate and fragile items are placed safe and secure on the top of everything else so that they are not damaged by heavy items being placed on top of them! If you need any furniture dismantling and putting back together again at the other end we can do this for you too!

We don't have a long winded mission statement at Van Man Hire, it's one of simplicity:

To become the leading Man and Van removals provider throughout the whole of Yorkshire and Derbyshire in respect to quality, value & service!

Well I hope the above gives a good impression of our company and the type of service you will expect to receive upon booking a removal service with Van Man Hire. I'm available 7 days a week on my mobile or contactable through email on the contact form should you have any questions about the services we offer or would generally like some advice for your moving day. The team and I look forward to helping you move in the future! Bye for now. 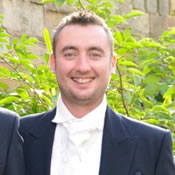