If you're looking for a reliable moving service in Alfreton then your search is over! Van Man Hire are proud to provide a professional, fully insured and low-cost moving service to the people of Alfreton and surrounding areas.

Unlike the larger moving companies such as Pickfords and Britannia, using Van Man Hire for your removals service in Alfreton often works out half the price of what you would have paid with them. Click the prices links from our menus for a detailed list of our pricing structure and then compare them with the bigger removal companies to know for certain that Van Man Hire is the best choice!

Alfreton is said to have been founded by King Alfred and to have derived its name from him. The placename appears in different forms throughout the ages, such as 'Elstretune' in Domesday, but the earliest appears to be in AD1004 in the will of Wulfric Spott, the founder of Burton Abbey. Amongst his bequests was 'Aelfredingtune', or 'Alfred's farmstead', which is believed to relate to Alfreton. However there is no evidence that this Alfred was the aforementioned king.

To the south-west near Pentrich was a Roman fortlet on the major road known as Ryknield Street. Another Roman road known as Lilley Street ran from there to the southern end of Alfreton, suggesting that settlement in the area predated the time of King Alfred by several centuries.

The initial settlement was centred at the top of the modern King Street hill, where the original market place developed. On the hilltop there was also an ancient meeting hall (the 'Moot Hall') until 1914, and several inns became established over the centuries, some of which survive today. To the west was a manor house, and the nearby Church of St. Martin, parts of which date back to 1200. The manor of Alfreton spread over lands to the south and east, including the parishes of Somercotes, Swanwick, Riddings and Ironville. The first Lord of the Manor was Earl Roger de Busli, who delegated the position to Baron Ralf Ingram. The position was passed down variously through heredity, gift and sale over the centuries up until William Palmer-Morewood, the last Lord of Alfreton, who died in 1957.

A former coal-mining town in the North of Derbyshire, Alfreton provides the perfect location to explore both the Peak District and the Derbyshire Dales, whilst also close enough to provide access to the cities of Derby, Nottingham and Sheffield.

Alfreton has some wonderful examples of 18th century architecture such as the old George Hotel and Alfreton Hall that add some real character to a stroll along the high street. Built circa 1724-25, Alfreton Hall was the home of George Morewood and was in turn owned by the Palmer Morewood family, owners of many of the local coalmines. In 1963, the County Council acquired the estate and is now part of a splendid public park with swimming and sports facilities. Further historical points of interest in Alfreton include the parish church of St Martin that contains monuments to the Morewood family, and dates from the 13th century. Also of interest is an old lock-up, known as a 'house of confinement' dating from 1820, which can be found at the bottom of King Street. Along the high street you can find plenty of shops, and there are a great many restaurants, pubs and other places to visit situated throughout the town.

It is home to Alfretown F.C.

Visit Alfreton Town Guide for infmation on pubs, restaurants and other town interests. 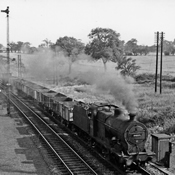