If you're looking for a reliable moving service in Derby then your search is over! Van Man Hire are proud to provide a professional, fully insured and low-cost moving service to the people of Derby and surrounding areas.

Unlike the larger moving companies such as Pickfords and Britannia, using Van Man Hire for your removals service in Derby often works out half the price of what you would have paid with them. Click the prices links from our menus for a detailed list of our pricing structure and then compare them with the bigger removal companies to know for certain that Van Man Hire is the best choice!

During the Civil War of 1642 - 1646, Derby was garrisoned by Parliamentary troops commanded by Sir John Gell, 1st Baronet, who was appointed Governor of Derby in 1643. These troops took part in the defence of nearby Nottingham, the Siege of Lichfield, the Battle of Hopton Heath and many other engagements in Nottinghamshire, Staffordshire and Cheshire, as well as successfully defending Derbyshire against Royalist armies.

A hundred years later, Bonnie Prince Charlie set up camp at Derby on 4 December 1745, whilst on his way south to seize the British crown. The prince called at The George Inn on Irongate, where the Duke of Devonshire had set up his headquarters, and demanded billets for his 9,000 troops.

He stayed at Exeter House, Exeter Street where he held his "council of war". A replica of the room is on display at Derby Museum in the city centre. He had received misleading information about an army coming to meet him south of Derby. Although he wished to continue with his quest, he was over-ruled by his fellow officers. He abandoned his invasion at Swarkestone Bridge on the River Trent just a few miles south of Derby. As a testament to his belief in his cause, the prince - who on the march from Scotland had walked at the front of the column - made the return journey on horseback at the rear of the bedraggled and tired army.

Derby is a city and unitary authority in the East Midlands region of England. It lies upon the banks of the River Derwent and is located in the south of the ceremonial county of Derbyshire, of which it was traditionally the county town. In the 2011 census, the city had a population of 248,700.

As home to Lombe's Mill, the first factory in the world, Derby is considered the birthplace of the Industrial Revolution. With the arrival of the railways in the 19th century, and due to its strategic central location, the city grew to become the foremost centre of the British rail industry.

Derby is twinned with Osnabruck in Germany. The partnership treaty between the two cities was signed on 17 February 1976.

Local information can be found about Derby at City Local and Visit Derby. 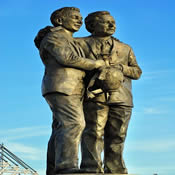