Unlike the larger moving companies such as Pickfords and Britannia, using Van Man Hire for your removals service in Featherstone often works out half the price of what you would have paid with them. Click the prices links from our menus for a detailed list of our pricing structure and then compare them with the bigger removal companies to know for certain that Van Man Hire is the best choice!

In 1848, the opening of the Wakefield, Pontefract and Goole railway line through Featherstone, provided the basis for large scale coal mining in Featherstone, by opening up new markets in the South of England and Europe. Coal had been mined at Featherstone since the 13th century and remains of bell pits can still be seen to the north of Park Lane at North Featherstone.

Like many surrounding areas, Featherstone grew around coal mining, and was the site of a miners' strike in 1893. During the strike the town came to national attention when soldiers fired on striking miners, killing two. A distinctive sculpture marking the centenary of the Featherstone Massacre stands in the shopping precinct and a large mural depicting the town's heritage can be seen at the town's main crossroads. Ackton Hall Colliery was the first pit to close following the end of the miners' strike and this could not be contested as geological difficulties had made it impossible for the pit to continue production.

Despite most population growth taking place around the Industrial Revolution, Featherstone traces its history back much further than this. It is thought that a local public house, the Traveller's Rest, can trace its origins to the 17th century whilst the Jubilee Hotel is a listed building which once provided a resting place for wealthy Victorians and their horses.

Featherstone is undergoing continual change and as part of this a new, state-of-the-art £2.5 million community centre has been built in Station Lane. The "Pit Houses", the houses constituting a council estate which formerly belonged to the National Coal Board, have been demolished to make room for further developments.

Opened in the 1950s, Purston Park takes up a large area of space and offers a lake and a children's play area. There was also previously a bowling green, until being changed to a rose garden in 2004. It has been made out of the grounds of what was originally a private residence and a country estate, with the stately home formerly acting as the town hall. This building was sold to developers in 2007 and has since been converted into luxury flats.

Featherstone is a town and civil parish in the City of Wakefield in West Yorkshire. Historically part of the West Riding of Yorkshire, it lies less than two miles south-west of Pontefract and in 2011 had a population of 15,244. Featherstone railway station is on the Pontefract Line.

You can visit this site for local information on Featherstone. 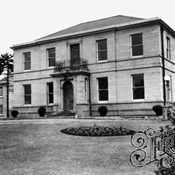