If you're looking for a reliable moving service in Finningley then your search is over! Van Man Hire are proud to provide a professional, fully insured and low-cost moving service to the people of Finningley and surrounding areas.

Unlike the larger moving companies such as Pickfords and Britannia, using Van Man Hire for your removals service in Finningley often works out half the price of what you would have paid with them. Click the prices links from our menus for a detailed list of our pricing structure and then compare them with the bigger removal companies to know for certain that Van Man Hire is the best choice!

Finningley is a traditional village with reminders of the 19th century around the village green, pond and church.

The name Finiglei or Finningley, as it is now known, means clearing in the fen. In the Doomsday Book it appears that Gilbert Tison held the manor of Finglei, and had "there half a plough and fifteen villanes and four bordars, having five ploughs and a half, wood pasture two miles long and two broad...".

Sir Martin Frobisher, one of Queen Elizabeth's most noted admirals, drew his first breath in Finningley Grange, later known as Finningley Hall. In the 17th century, the Harvey family of lckwell, Bury, Bedfordshire took over the Finningley Manor and resided at the Hall until the late 19th century. At one time this residence was occupied by the Parker Rhodes family.

The village school (now the village hall) opened in 1855, transferring to the Silver Birch Grove premises in 1965.

Housing in the village formerly consisted mainly of old farm cottages and Council houses, built just after the Second World War, on Chapel Lane and Wroot Road. During the late 1950s Council houses were erected on Lindley Road. There was very little private housing development until the early 1960s, since when several small private estates have been built.

Finningley is a village and civil parish within the Metropolitan Borough of Doncaster, in South Yorkshire

Finningley is known for its airport, formerly RAF Finningley. The station housed a 'V' force of Vulcan bombers during the Cold War, and for 35 years it hosted a regular air show which, by the 1990s, was the largest one-day military air show in the country. However, the end of the Cold War led to the airfield being closed in April 1996, with the air show dying with it.

The 2,741 metre long runway, currently the second longest in the north of England, was sufficiently large to take even Concorde, and in the period after the closure of the RAF airfield there were several campaigns to turn Finningley into a commercial airport for the unserved South Yorkshire region (as well as Nottinghamshire, Lincolnshire and the East Riding of Yorkshire).

Plans for the conversion were finally approved in 2003, with the first flights in April 2005. It is anticipated that the airport, renamed Robin Hood Airport Doncaster Sheffield, will reach maximum capacity by 2014. Planning permission for a new railway station to serve it was recently granted - the former station serving it and the village having closed back in 1961.

Leon Motors, a bus company located in Finningley, operates buses in Doncaster. Formed in 1922, it was taken over by MASS of North Anston during 2004. Finningley is also home to a famous Motocross venue called Doncaster Moto Parc which attracts riders from all over the country. 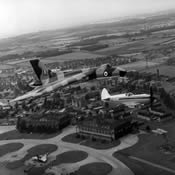