Unlike the larger moving companies such as Pickfords and Britannia, using Van Man Hire for your removals service in Gainsborough often works out half the price of what you would have paid with them. Click the prices links from our menus for a detailed list of our pricing structure and then compare them with the bigger removal companies to know for certain that Van Man Hire is the best choice!

Gainsborough was one of the capital cities of Mercia during the Anglo - Saxon period, which had preceded Danish rule. It is understandable that the Viking kings would have been drawn to it as an administrative centre, being close to the Danish stronghold at Torksey.

In 868 King Alfred married Ealswitha, daughter of Aethelred Mucill, chief of the Gaini, whence the town gets its name.

Historically, Gainsborough is the "capital that never was". Towards the end of July 1013, the Dane Sweyn Forkbeard, together with his son Canute, arrived in Gainsborough with an army of conquest. Sweyn defeated the Anglo - Saxon opposition and King Ethelred fled the country. Sweyn was declared King of England, and he returned to Gainsborough. Sweyn and Canute took up high office at the Gainsborough Castle (on the site of the present day Old Hall), while his army occupied the camp at Thonock (today known as Castle Hills). But King Sweyn was killed five weeks later when he was thrown from his horse in Gainsborough. His son Canute established a base elsewhere.

King Canute allegedly performed his unsuccessful attempt to turn the tide back in the River Trent at Gainsborough. Historians believe he may have been demonstrating on the aegir. He and his supporters may have known Gainsborough was the furthest reach of the aegir, and ideal for his demonstration.

Gainsborough is a town in the West Lindsey district of Lincolnshire. It is situated 15 miles (24 km) north-west from the city and county town of Lincoln, and on the River Trent. At one time it served as an important port with trade downstream to Hull, and was the most inland port in England, being more than 55 miles (90 km) from the North Sea.

You can find information on places to visit and the goings on at Gainsborough Town Talk. 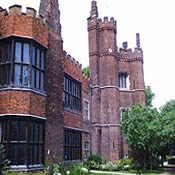