If you're looking for a reliable moving service in Leicester then your search is over! Van Man Hire are proud to provide a professional, fully insured and low-cost moving service to the people of Leicester and surrounding areas.

Unlike the larger moving companies such as Pickfords and Britannia, using Van Man Hire for your removals service in Leicester often works out half the price of what you would have paid with them. Click the prices links from our menus for a detailed list of our pricing structure and then compare them with the bigger removal companies to know for certain that Van Man Hire is the best choice!

Leicester is one of the oldest cities in England, with a history going back at least two millennia. The native Iron Age settlement encountered by the Romans at the site seems to have developed in the 2nd or 1st centuries BC. Little is known about this settlement or the condition of the River Soar at this time, although roundhouses from this era have been excavated and seem to have clustered along roughly 8 hectares (20 acres) of the east bank of the Soar above its confluence with the Trent. This area of the Soar was split into two channels: a main stream to the east and a narrower channel on the west, with a presumably marshy island between. The settlement seems to have controlled a ford across the larger channel. The later Roman name was a latinate form of the Brittonic word for "ramparts" (cf. Gaelic rath & the nearby villages of Ratby and Ratcliffe), suggesting the site was an oppidum. The plural form of the name suggests it was initially composed of several villages. The Celtic tribe holding the area was later recorded as the "Coritanians" but an inscription recovered in 1983 showed this to have been a corruption of the original "Corieltauvians". The Corieltauvians are believed to have ruled over roughly the area of the East Midlands.

Leicester is a city and unitary authority area in the East Midlands of England, and the county town of Leicestershire. The city lies on the River Soar and at the edge of the National Forest. It is the burial place of King Richard III.

"Unlike almost every other city in the UK, Leicester has retained a remarkable record of its past in buildings that still stand today". Ancient Roman pavements and baths remain in Leicester from its early settlement as Ratae, a Roman military outpost in a region inhabited by the Celtic Corieltauvi tribe. Following the Roman withdrawal from Britain, the early medieval Ratae is shrouded in obscurity, but when the settlement was captured by the Danes it became one of five fortified towns important to the Danelaw and it appeared in the Domesday Book as "Ledecestre". Leicester continued to grow throughout the Early Modern period as a market town, although it was the Industrial Revolution that facilitated a process of rapid unplanned urbanisation in the area.

Leicester is located at the intersection of the north/south Midland Main Line and east/west Birmingham/Leicester/Cambridge CrossCountry railway lines and at the confluence of the M1 / M69 motorways and the A6 / A46 trunk routes.

Leicester City F.C. is the local football team playing their matches at the King Power Stadium. 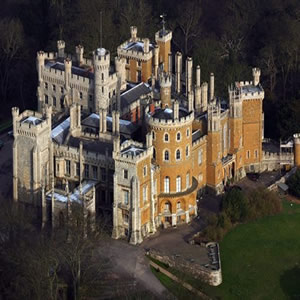