If you're looking for a reliable moving service in Mansfield then your search is over! Van Man Hire are proud to provide a professional, fully insured and low-cost moving service to the people of Mansfield and surrounding areas.

Unlike the larger moving companies such as Pickfords and Britannia, using Van Man Hire for your removals service in Mansfield often works out half the price of what you would have paid with them. Click the prices links from our menus for a detailed list of our pricing structure and then compare them with the bigger removal companies to know for certain that Van Man Hire is the best choice!

Settlement in the Mansfield area is known to date back to Roman times, with a villa discovered in 1787 by a Major Rooke between Mansfield Woodhouse and Pleasley and a cache of denarii coins found near King's Mill in 1849. After the end of Roman occupation, the early English royalty are said to have stayed there, with the Mercian Kings having used it as a base for hunting in the nearby Sherwood Forest.

The Domesday book compiled in 1086 has the settlement recorded as Mammesfeld whereas in later market-petition documents of 1227 the spelling had changed to Maunnesfeld. By the time of King Richard II signing a Warrant in November 1377 granting the right for the tenants to hold a fair every year for four days, the spelling had changed again to Mannesfeld.

There are remains of the 12th-century King John's Palace, in Clipstone between Mansfield and Edwinstowe. The area was originally a retreat for royal families and dignitaries in the fourteen and fifteenth centuries due to its location within Sherwood Forest famed for it's fresh air and exclusiveness. Access to the town was via small horse-drawn carriageway from the city of Nottingham that was en route to Sheffield.

On West Gate within the town centre, a commemorative wall plaque marks the point that was thought to be the centre of Sherwood Forest 2013. A tree has been planted nearby.

Access to the town between the 16th and 17th centuries was via several inns and stable yards. The Harte, The Swan (which has a dating stone with 1490AD was found during alterations) The Talbot, The White Bear, The Ram (timber dating to pre 1500AD) and White Lion were known to date from medieval times. Several timber-framed cruck buildings were demolished in 1929 and another in 1973 which was documented by a local historical society during its demolition and was dated at circa 1400AD, or earlier.

Other glorious Tudor houses on Stockwell Gate, Bridge Street and Lime Tree place were also sadly demolished to make way for new developments before they could be viewed for being listed properties. The majority of buildings remaining are from the 17th century onwards.

Mansfield is a town in Nottinghamshire. It is the main town in the Mansfield local government district and is a part of the Mansfield Urban Area. Surrounded by a pocket of steep hills within the Maun Valley, the town is around 12 miles (19 km) north of Nottingham. The district of Mansfield is a largely urban area situated in the north west of Nottinghamshire populated by 99,600 residents of whom the vast majority live in Mansfield (including Mansfield Woodhouse), with Market Warsop a secondary centre, and the remainder in the rural north of the district. Adjacent to the urban area of Sutton-in-Ashfield, Mansfield is the only major sub-regional centre in Nottinghamshire covering an area of 78 square kilometres. The Centre for Cities (2009) categorises the town as a 'small city', although it does not officially hold city status.

Mansfield is the only local authority area in the county to have a directly elected Mayor and in October 2008 Mansfield elected its first Youth Mayor.

Historically, the district has been influenced heavily by its industrial past with coal mining and textiles thriving in the district until their decline in the 1990s, but in common with the national economy the area has seen the decline of these sectors. Mansfield has 20.2% (12,890) of its working age population seeking key out of work benefits (based on a 63,800 total working age population) (NOMIS).

Over the last century the population has declined in parallel with this traditional industrial base. However much has been done to diversify the economic base and to replace jobs lost. Mid-year population forecasts reveal that since April 2008 the population has gone from 100,100 to 100,600 in 2009, 99,700 in 2010 to the current figure of 99,600 in 2011

More information on the area of Mansfield can be found at this website. 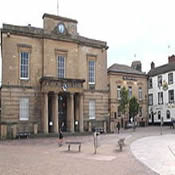