If you're looking for a reliable moving service in Runcorn then your search is over! Van Man Hire are proud to provide a professional, fully insured and low-cost moving service to the people of Runcorn and surrounding areas.

Unlike the larger moving companies such as Pickfords and Britannia, using Van Man Hire for your removals service in Runcorn often works out half the price of what you would have paid with them. Click the prices links from our menus for a detailed list of our pricing structure and then compare them with the bigger removal companies to know for certain that Van Man Hire is the best choice!

Little is known about the early history of the settlement but isolated findings of objects from the Stone, Bronze and Iron Ages have been made and there is evidence of a Roman presence in the area. The earliest recorded event in its history is the building by Ethelfleda of a fortification at Runcorn to protect the northern frontier of her kingdom of Mercia against the Vikings in 915. The fort was built on Castle Rock overlooking the River Mersey at Runcorn Gap.

Following the Norman conquest, Runcorn was not mentioned in the 1086 Domesday survey, although surrounding settlements were. William the Conqueror granted the earldom of Chester to Hugh d'Avranches who granted the barony of Halton to Nigel. It is likely that Nigel erected a motte and bailey castle on Halton Hill in the 1070s. In 1115, Nigel's son, William Fitznigel, founded an Augustinian Priory at Runcorn. In 1134 the priory was moved to Norton, about 3.5 miles (6 km) away. In 1391 the priory was raised to the higher status of abbey. In 1536 the monastery was dissolved, and around nine years later the buildings and some of the monastic lands were sold to Sir Richard Brooke who converted the habitable part of the abbey into a house.

During the Civil War Halton Castle was held for the Royalists by John Savage, 2nd Earl Rivers, the Steward of Halton. It fell twice to Parliamentarian Roundheads. The first siege was led by Sir William Brereton in 1643; the second was during the following year. Following this, a "Council of War" was held in Warrington in 1646 at which it was decided that the castle should be slighted. In 1656, Runcorn was described as being "nothing but a fair parish church, a parsonage and a few scattered tenements". And so it remained for over a century, an isolated and poor hamlet. The only through traffic used the ferry which crossed from Runcorn to the north bank of the River Mersey. Towards the end of the 18th century and in the early years of the 19th century the town was a health resort.

Runcorn is an industrial town and cargo port within the borough of Halton in the ceremonial county of Cheshire. In 2011, Halton's population was recorded to be 127,500, with that of Runcorn alone being 61,000. The town is on the southern bank of the River Mersey where the estuary narrows to form Runcorn Gap. Directly to the north across the Mersey is the town of Widnes. Upstream and 8 miles (12.9 km) to the northeast is the town of Warrington and downstream 16 miles (26 km) to the west is the city of Liverpool.

Runcorn railway station is on a branch of the West Coast Main Line. It provides frequent services to London (Euston), Liverpool and Birmingham. The A533 road passes through the town from the south, crossing the Runcorn Gap over the Silver Jubilee Bridge, the lowest bridge crossing of the River Mersey. The Manchester Ship Canal runs alongside the Runcorn bank of the River Mersey; the Bridgewater Canal terminates in the canal basin in the town centre, as the staircase of locks leading down to the Ship Canal was filled in many decades ago.

Runcorn was a small, isolated village until the coming of the Industrial Revolution. It was a health resort in the late 18th and early 19th centuries. Towards the end of the 18th century, a port began to develop on the south bank of the River Mersey. During the 19th century, industries developed the manufacture of soap and alkali, quarrying, shipbuilding, engineering and tanning. In the early 20th century, the prime industries were chemicals and tanning. The original village has grown to include what were outlying villages. Except for chemicals, all of the old industries have disappeared and there has been diversification, in particular because of the close links to the motorway system and the development of warehousing and distribution centres. A new town was built to the east of the existing town in the 1960-'70s and areas of private housing have been established, farther to the east; this has resulted in the population more than doubling from around 30,000 to its present level. 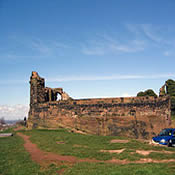