If you're looking for a reliable moving service in Sale then your search is over! Van Man Hire are proud to provide a professional, fully insured and low-cost moving service to the people of Sale and surrounding areas.

Unlike the larger moving companies such as Pickfords and Britannia, using Van Man Hire for your removals service in Sale often works out half the price of what you would have paid with them. Click the prices links from our menus for a detailed list of our pricing structure and then compare them with the bigger removal companies to know for certain that Van Man Hire is the best choice!

A flint arrowhead discovered in Sale suggests a prehistoric human presence, but there is no further evidence of activity in the area until the Roman period. A 4th-century hoard of 46 Roman coins was discovered in Ashton upon Mersey, one of four known hoards dating from that period discovered within the Mersey basin. Sale lies along the line of the Roman road which runs between the fortresses at Chester (Deva Victrix) and York (Eboracum), via the fort at Manchester (Mamucium); the present-day A56 follows the route of the road through the town. After the Roman departure from Britain in the early-5th century, Britain was invaded by the Anglo-Saxons.

Some local field and road names, and the name of Sale itself, are Anglo-Saxon in origin, which indicates the town was founded in the 7th or 8th centuries. The Old English salh, from which "Sale" is derived, means "at the sallow tree", and Ashton upon Mersey means "village or farm near the ash trees". Although the townships of Sale and Ashton upon Mersey were not mentioned in the Domesday Book of 1086, that may be because only a partial survey was taken. The first recorded occurrences of Sale and Ashton upon Mersey are in 1199-1216 and 1260 respectively. The settlements were referred to as townships rather than manors, which suggests further evidence of Anglo-Saxon origins as townships were developed by the Saxons.

The manor of Sale was one of 30 held by William FitzNigel, a powerful 12th-century baron in north Cheshire. He divided it between Thomas de Sale and Adam de Carrington, who acted as Lords of the Manor on FitzNigel's behalf. On de Sale's death, his land passed to his son-in-law, John Holt; de Carrington's land passed into the ownership of Richard de Massey, a member of the Masseys who were Barons of Dunham. Sale descended through the Holt and Massey families until the 17th century, when their respective lands were sold. Sale Old Hall was built in about 1603 for James Massey, probably to replace a medieval manor house, and was one of the first buildings in northwest England to be made of brick. It was rebuilt in 1840 and demolished in 1920, but two buildings in its grounds have survived: its dovecote and its lodge, the latter now occupied by Sale Golf Club.

In 1745, Crossford Bridge – which dated back to at least 1367 – was torn down. It was one of a series of bridges crossing the River Mersey destroyed by order of the government, to slow the advance of Jacobite forces during the Jacobite rising. The Jacobites repaired the bridge upon reaching Manchester, and used it to send a small force into Sale and Altrincham. Their intention was to deceive the authorities into believing that the Jacobites were heading for Chester. The feint was successful and the main Jacobite army later marched south through Cheadle and Stockport instead.

Sale is a town within the Metropolitan Borough of Trafford, in Greater Manchester. Historically part of Cheshire, the town lies on flat ground on the south bank of the River Mersey, 1.9 miles (3.1 km) south of Stretford, 2.5 miles (4.0 km) northeast of Altrincham, and 5.2 miles (8.4 km) southwest of the city of Manchester. As of the 2001 United Kingdom census, it had a population of 55,000.

Evidence of Stone Age, Roman, and Anglo-Saxon activity has been discovered locally. Throughout the Middle Ages, Sale was a rural township, linked ecclesiastically with neighbouring Ashton upon Mersey. In this period, its fertile fields and meadows were used for crops and cattle farming. By the 17th century Sale, had developed a thriving cottage industry, manufacturing garthweb, the woven material from which horses' saddle girths were made.

The Bridgewater Canal reached the town in 1765, providing transport for goods and people, stimulating Sale's urbanisation. The arrival of the railway in 1849 triggered Sale's growth as a commuter town for Manchester and beyond, leading to an influx of middle class residents; by the end of the 19th century the town's population had more than tripled. Agriculture subsequently declined as service industries boomed.

Sale's urban growth resulted in a merger with neighbouring Ashton upon Mersey, following the Local Government Act 1929. The increase in population led to the granting of a charter in 1935, giving Sale honorific borough status. Since then, Sale has continued to thrive as a commuter town, supported by its proximity to the M60 motorway and the Manchester Metrolink network. Retail, real estate, and business sectors have developed. Two of the town's main attractions are the Sale Water Park, which contains an artificial lake used for water-sports, and the Waterside Arts Centre. Sale Sharks rugby union club was founded in the town, as was the Sale Harriers athletics club, although both have now relocated elsewhere. 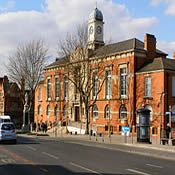