If you're looking for a reliable moving service in Selby then your search is over! Van Man Hire are proud to provide a professional, fully insured and low-cost moving service to the people of Selby and surrounding areas.

Unlike the larger moving companies such as Pickfords and Britannia, using Van Man Hire for your removals service in Selby often works out half the price of what you would have paid with them. Click the prices links from our menus for a detailed list of our pricing structure and then compare them with the bigger removal companies to know for certain that Van Man Hire is the best choice!

The town’s origins date from the establishment of a Viking settlement on the banks of the River Ouse. Archaeological investigations in Selby have revealed extensive remains, including waterlogged deposits in the core of the town dating from the Roman period onwards. It is believed that Selby originated as a settlement called Seletun which was referred to in the Anglo Saxon Chronicle of AD 779.

The town of Selby, a sizeable town on the main route north from the Midlands, is the traditional birthplace of King Henry I, fourth son of William the Conqueror, in 1068/69; the connection is supported by William and his wife Matilda's unique joint charter of Selby Abbey, far to the north of their usual circuit of activities, which was founded for Benedict of Auxerre in 1069 and subsequently supported by the de Lacy family. It is one of the largest parish churches in Britain and is larger than several cathedrals. King Henry I is reputed to have been born there in either 1068 or 1069. A notable feature of the Abbey is the 14th century Washington Window, featuring the heraldic arms of the ancestors of George Washington, the first president of the United States. The design is often cited as an influence for the Stars and Stripes flag.

The Abbey was founded when Benedict saw three swans on a lake in Selby, and he saw it as a sign of the Father, Son and Holy Ghost. That is why the official crest of Selby Abbey is three swans. Selby Abbey was closed in 1539 as part of the Dissolution of the Monasteries under Henry VIII and the majority of the buildings have since been demolished. The central nave of the abbey church survived and in 1618 it became the parish church of Selby.

There was also a very important battle in the English Civil War, named the Battle of Selby. There are many other historical sites, like the Cholera burial ground on the north side of the abbey, the market cross and the local school, Selby High School. The Market Place has existed since the early 14th century when the market was moved away from the monastery churchyard. The Crescent which curves eastwards from James Street was planned in the early 19th century by a local man, John Audus, after seeing Lansdown Crescent in Bath.

Selby is expanding to become a larger town. New houses and shops are being built on the present town's outskirts with the expansion of the town stretching as far as the bypass, although this has resulted in the loss of some trade from the town centre. Meanwhile the riverfront area is being revamped with modern housing and fashionable flats.

Selby was also a centre for shipbuilding, with vessels launched into the river. This often required the more unusual technique of launching the vessels side-on into the river due to lack of space for a more conventional stern first or bow first launch. One famous vessel of the Cochrane and Son's shipyard of the town is the preserved trawler Ross Tiger at Grimsby's National Fishing Heritage Centre. Cochrane launched their last vessel into the Ouse in 1998, a historical occasion which people around the area went to see. Once Cochrane had closed, the massive cranes still stood over the skyline of Selby until 2001, when seriously strong winds blew them down. As of 2009 the area of the shipyard has been completely demolished but to the left of the yard the parts of the cranes can be still seen.

Selby is a town and civil parish in North Yorkshire. Situated 14 miles (22.5 km) south of the city of York, along the course of the River Ouse, Selby is the largest and, with a population of 13,012, most populous settlement of the wider Selby local government district.

Historically a part of the West Riding of Yorkshire, much of the wealth of the town was facilitated via Selby's position upon the banks of the River Ouse. In the past, Selby had a large shipbuilding industry and was an important port, for the most part due to the Selby Canal which brought trade from the city of Leeds. Selby is home to Selby Town who play in the Northern Counties East Football League. 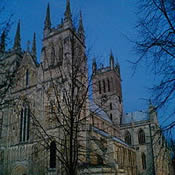