If you're looking for a reliable moving service in St Helens then your search is over! Van Man Hire are proud to provide a professional, fully insured and low-cost moving service to the people of St Helens and surrounding areas.

Unlike the larger moving companies such as Pickfords and Britannia, using Van Man Hire for your removals service in St Helens often works out half the price of what you would have paid with them. Click the prices links from our menus for a detailed list of our pricing structure and then compare them with the bigger removal companies to know for certain that Van Man Hire is the best choice!

St Helens did not exist as a town in its own right until as late as the middle of the 19th century. The town has a complex evolution spurred on by rapid population growth in the region during the period of the Industrial Revolution. Between 1629 and 1839 St Helens grew from a small collection of houses surrounding an old chapel, to a village, before finally becoming the significant urban centre of the four primary Manors and surrounding townships that make up the modern Town.

The origin of the name "St Helens" stretches back at least to a "chapel of ease" dedicated to St Elyn, the earliest documented reference to which is in 1552. The first time the Chapel is formally referred to appears to be 1558 when Thomas Parr of Parr bequeathed a sum of money "to a stock towards finding a priest at St. Helen's Chapel in Hardshaw, and to the maintenance of God's divine service there for ever, if the stock go forward and that the priest do service as is aforesaid". Early maps show that it originally existed on Chapel Lane, around the approximate site of the modern pedestrianised Church Street. Historically this would have fallen within the berewick of Hardshaw, within greater Township of Windle (making up the southern border) abutting onto the open farmland of Parr to the East, and Sutton and Eccleston to the South and West respectively.

St Helens is a large town in Merseyside. It is the largest settlement and administrative centre of the Metropolitan Borough of St Helens with a population of just over 100,000, while the larger metropolitan borough had a population of 176,843 at the time of the 2001 Census. The town was officially incorporated as a municipal borough in 1868 responsible for the administration of the 4 townships consisting of Eccleston, Parr, Sutton and Windle, with the larger responsibility as a county borough established in 1887 (superseded in 1974 by the larger still metropolitan borough).

St Helens is situated in the south west of the historic county of Lancashire, in North West England, 6 miles (9.7 km) north of the River Mersey. The town historically lay within the ancient Lancashire division of West Derby known as a "hundred".

The local area developed rapidly during the Industrial Revolution of the 18th and 19th centuries into a significant centre for coal mining, and glassmaking. Both prior and during this time it was also home to a cotton and linen industry (notably sail making) that lasted until the mid-19th century as well as salt, lime and alkali pits, copper smelting, and brewing.

Today, St Helens is very much a commercial town. The main industries have since left, become outdated, or have been outsourced leaving the float and patterned rolled glass producer Pilkington's, a world leader in their industry, as the town's one remaining large industrial employer. Previously the town had been home to Beechams (now part of GlaxoSmithKline), the Gamble family of the Alkali Works, Ravenhead glass (bought out by the Belgian nationalised Durobor), United Glass Bottles (U.G.B.), Triplex (owned by Pilkington, farmed out to India), Daglish Foundry (closed and demolished 1939), and Greenall's (now located in nearby Warrington).

The Saints, St Helens R.F.C are the local rugby team. 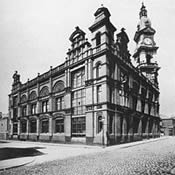