If you're looking for a reliable moving service in Stockport then your search is over! Van Man Hire are proud to provide a professional, fully insured and low-cost moving service to the people of Stockport and surrounding areas.

Unlike the larger moving companies such as Pickfords and Britannia, using Van Man Hire for your removals service in Stockport often works out half the price of what you would have paid with them. Click the prices links from our menus for a detailed list of our pricing structure and then compare them with the bigger removal companies to know for certain that Van Man Hire is the best choice!

The earliest evidence for human occupation in the wider area are microliths from the hunter-gatherers of the Mesolithic period (the Middle Stone Age, about 8000-3500 BC) and weapons and stone tools from the Neolithic period (the New Stone Age, 3500-2000 BC). Early Bronze Age (2000-1200 BC) remains include stone hammers, flint knives, palstaves (bronze axe heads), and funerary urns; all finds have been chance discoveries, rather than a systematic search of a known site. There is a gap in the age of finds between about 1200 BC and the start of the Roman period in about 70 AD. This may indicate depopulation, possibly due to a poorer climate.

Despite a strong local tradition, there is little evidence of a Roman military station at Stockport. It is assumed that roads from Cheadle to Ardotalia (Melandra) and Manchester to Buxton crossed close to the town centre. The preferred site is at a ford over the Mersey, known to be paved in the 18th century, but it has never been proved that this or any roads in the area are Roman. Hegginbotham reported (in 1892) the discovery of Roman mosaics at Castle Hill (around Stockport market) in the late 18th century, during the construction of a mill, but noted it was "founded on tradition only"; substantial stonework has never been dated by modern methods. However, Roman coins and pottery were probably found there during the 18th century. A cache of coins dating from 375-378 AD may have come from the banks of the Mersey at Daw Bank; these were possibly buried for safekeeping at the side of a road.

Six coins from the reigns of the Anglo-Saxon English Kings Edmund (reigned 939-946) and Eadred (reigned 946-955) were found during ploughing at Reddish Green in 1789. There are contrasting views about the significance of this; Arrowsmith takes this as evidence for the existence of a settlement at that time, but Morris states the find could be "an isolated incident". The small cache is the only Anglo-Saxon find in the area. However, the etymology Stoc-port suggests inhabitation during this period

Stockport is a large town in Greater Manchester. It lies on elevated ground 6 miles (10 km) southeast of Manchester city centre, at the point where the rivers Goyt and Tame merge to create the River Mersey. Stockport is the largest settlement in the metropolitan borough of the same name. As of the 2001 Census the town had a population of 136,082 and the wider borough 284,528.

Historically, most of the town was in Cheshire, but the area to the north of the Mersey was in Lancashire. Stockport in the 16th century was a small town entirely on the south bank of the Mersey, and known for the cultivation of hemp and rope manufacture. In the 18th century the town had one of the first mechanised silk factories in the British Isles. However, Stockport's predominant industries of the 19th century were the cotton and allied industries. Stockport was also at the centre of the country's hatting industry, which by 1884 was exporting more than six million hats a year; the last hat works in Stockport closed in 1997.

Dominating the western approaches to the town is the Stockport Viaduct. Built in 1840, the viaduct's 27 brick arches carry the mainline railways from Manchester to Birmingham and London over the River Mersey. This structure featured as the background in many paintings by L. S. Lowry. 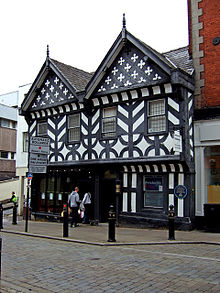