If you're looking for a reliable moving service in Wakefield then your search is over! Van Man Hire are proud to provide a professional, fully insured and low-cost moving service to the people of Wakefield and surrounding areas.

Unlike the larger moving companies such as Pickfords and Britannia, using Van Man Hire for your removals service in Wakefield often works out half the price of what you would have paid with them. Click the prices links from our menus for a detailed list of our pricing structure and then compare them with the bigger removal companies to know for certain that Van Man Hire is the best choice!

During the Wars of the Roses, Richard Plantagenet, Duke of York was killed on 30 December 1460 in the Battle of Wakefield near Sandal Castle. As preparation for the impending invasion by the Spanish Armada in April 1558, 400 men from the wapentake of Morley and Agbrigg were summoned to Bruntcliffe near Morley with their weapons. Men from Kirkgate, Westgate, Northgate and Sandal were amongst them and all returned by August. At the time of the Civil War, Wakefield was a Royalist stronghold. An attack led by Sir Thomas Fairfax on 20 May 1643 captured the town for the Parliamentarians. Over 1500 troops were taken prisoner along with the Royalist commander, Lieutenant-General Goring.

In medieval times Wakefield became an inland port on the Calder and centre for the woollen and tanning trades. In 1699 an Act of Parliament was passed creating the Aire and Calder Navigation which provided the town with access to the North Sea. The first Registry of Deeds in the country opened in 1704 and in 1765 Wakefield's cattle market was established and became the one of largest in the north of England. The town was a centre for cloth dealing with its own piece hall, the Tammy Hall, built in 1766. In the late 1700s Georgian town houses and St John's Church were built to the north of the town centre.

Wakefield is a city and the main settlement and administrative centre of the City of Wakefield, a metropolitan district of West Yorkshire. Located by the River Calder, on the eastern edge of the Pennines, the urban area is 2,062 hectares (5,100 acres) and had a population of 76,886 in 2001.

The site of a battle during the Wars of the Roses and a Royalist stronghold during the Civil War, Wakefield developed in spite of setbacks to become an important market town and centre for wool, exploiting its position on the navigable River Calder to become an inland port. 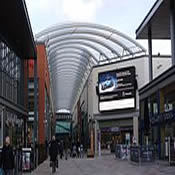