If you're looking for a reliable moving service in Warrington then your search is over! Van Man Hire are proud to provide a professional, fully insured and low-cost moving service to the people of Warrington and surrounding areas.

Unlike the larger moving companies such as Pickfords and Britannia, using Van Man Hire for your removals service in Warrington often works out half the price of what you would have paid with them. Click the prices links from our menus for a detailed list of our pricing structure and then compare them with the bigger removal companies to know for certain that Van Man Hire is the best choice!

Warrington has been a major crossing point on the River Mersey since ancient times and there was a Roman settlement at Wilderspool. In medieval times Warrington's importance was as a bridging point of the River Mersey, and it was a fulcrum in the English Civil War. The armies of Oliver Cromwell and the Earl of Derby both stayed near the old town centre (the parish church area). Popular legend has it that Cromwell lodged near the building which survives on Church Street as the Cottage Restaurant. The Marquis of Granby public house bears a plaque stating that the Earl of Derby 'had his quarters near this site'. Dents in the walls of the parish church are rumoured to have been caused by the cannons from the time of the civil war. On 13 August 1651 Warrington was the scene of the last Royalist victory of the civil war when Scots troops under Charles II and David Leslie, Lord Newark, fought Parliamentarians under John Lambert at the Battle of Warrington Bridge.

Warrington is a town, borough and unitary authority area of Cheshire. It stands on the banks of the River Mersey, which is tidal to the west of the weir at Howley. It is 18.5 miles (29.8 km) miles east of Liverpool, 16 miles (26 km) west of Manchester and 8 miles (13 km) south of St Helens. The population of the borough is 202,228. Its population has more than doubled since its designation as a New Town in 1968.

Warrington was founded by the Romans at an important crossing place on the River Mersey. A new settlement was established by the Saxons. By the Middle Ages, Warrington had emerged as a market town at the lowest bridging point of the river. A local tradition of textile and tool production dates from this time.

Historically in Lancashire, the expansion and urbanisation of Warrington largely coincided with the Industrial Revolution in the local region, particularly after the Mersey was made navigable in the 18th century. The West Coast Mainline runs north to south through the town, and the Liverpool to Manchester railway (the Cheshire Lines route) west to east. The Manchester Ship Canal cuts through the south of the borough (west to east). The M6, M56 and M62 motorways form a partial box around the town. People born (or living) in Warrington are known as Warringtonians. The modern Borough of Warrington was formed in 1974 with the amalgamation of the former County Borough of Warrington, part of the Golborne Urban District, the Lymm Urban District, part of the Runcorn Rural District, the Warrington Rural District and part of the Whiston Rural District. 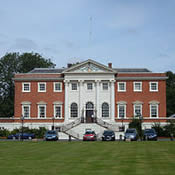