If you're looking for a reliable moving service in Widnes then your search is over! Van Man Hire are proud to provide a professional, fully insured and low-cost moving service to the people of Widnes and surrounding areas.

Unlike the larger moving companies such as Pickfords and Britannia, using Van Man Hire for your removals service in Widnes often works out half the price of what you would have paid with them. Click the prices links from our menus for a detailed list of our pricing structure and then compare them with the bigger removal companies to know for certain that Van Man Hire is the best choice!

There is little evidence of any early human occupation of the area although a flint arrowhead was discovered at Pex Hill, suggesting there was some human presence in the Stone Age. Pex Hill is a disused quarry, located to the north of the town. Roman roads by-passed the area but some Roman coins were found where the Ditton railway station stands today. In the 9th century Vikings had invaded the country and Widnes was at the extreme south of the Danelaw. The River Mersey derives its name from the Anglo-Saxon maeres ea, which means boundary river, the boundary being that between the Danelaw and the Saxon kingdom of Mercia. At the beginning of the 20th century it was believed that some earthworks on Cuerdley Marsh had been constructed by the Vikings but an archaeological investigation in the 1930s found nothing to confirm this.

Following the Norman conquest, William the Conqueror granted the Earldom of Lancaster to Roger de Poictou who in turn granted the barony of Widnes to Yorfrid. Yorfrid had no sons and his elder daughter married William FitzNigel, the second Baron of Halton. On Yorfrid's death the barony of Widnes passed to that of Halton. The current St. Luke's a Norman church was built in Farnworth. Its date of origin is uncertain but it is likely that this was around 1180. In 1500 the South Chapel was added to the church and in 1507 a grammar school was established in Farnworth both were endowments from Bishop William Smyth. Until the middle of the 19th century the area consisted of the scattered hamlets of Farnworth, Appleton, Ditton, Upton and Woodend. Nearby were the villages of Cronton and Cuerdley.

In the 1750s the Sankey Canal was constructed. This linked the area of St Helens with the River Mersey at Sankey Bridges, near Warrington and was in operation by 1757. It was extended to Fiddler's Ferry in 1762 and then in 1833 a further extension to Woodend was opened. In the same year the St Helens and Runcorn Gap Railway was opened. The railway connected St Helens with an area in Woodend which was to become known as Spike Island. The termini of the canal and railway were adjacent and here Widnes Dock, the world's first railway dock, was established. Despite these transport links and the emergence of the chemical industry at nearby Runcorn and elsewhere in the Mersey Valley, the Industrial Revolution did not arrive at Widnes until 14 years later, with the arrival at Spike Island of John Hutchinson

Widnes is an industrial town within the borough of Halton, in Cheshire, with an urban area population of 58,300 in 2010. Historically in Lancashire, it is located on the northern bank of the River Mersey where the estuary narrows to form the Runcorn Gap. Directly to the south across the Mersey is the town of Runcorn. Upstream and 8 miles (13 km) to the east is the town of Warrington, and downstream to the west is the neighbouring area of Speke, of the city of Liverpool.

Prior to the Industrial Revolution Widnes consisted of a small number of separate settlements on land which was mainly marsh or moorland. In 1847 the first chemical factory was established and the town rapidly became a major centre of the chemical industry. The demand for labour was met by the immigration of large numbers of workers from Ireland, Poland, Lithuania and Wales. The town continues to be a major manufacturer of chemicals and there has been a degree of diversification of the town's industries.

Widnes station lies on the southern route of the Liverpool to Manchester railway line. The main roads passing through the town are the A557 in a north-south direction and the A562 which runs east-west. The Sankey Canal (now disused) terminates in an area of the town known as Spike Island. 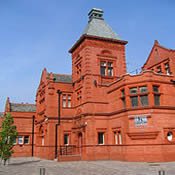