If you're looking for a reliable moving service in Yeadon then your search is over! Van Man Hire are proud to provide a professional, fully insured and low-cost moving service to the people of Yeadon and surrounding areas.

Unlike the larger moving companies such as Pickfords and Britannia, using Van Man Hire for your removals service in Yeadon often works out half the price of what you would have paid with them. Click the prices links from our menus for a detailed list of our pricing structure and then compare them with the bigger removal companies to know for certain that Van Man Hire is the best choice!

At the time of the Anglo-Saxons in the early 7th century AD much of the Aire valley was still heavily wooded, although perhaps Yeadon stood out above the tree line. The place name is probably derived from two Old English words meaning high hill, 'don' being taken from the Anglo-Saxon word for hill. Between 675 and 725 AD there was a Christian settlement in Airedale and other Norse settlements followed. Viking settlers called the highest point in the area Yeadon Haw. 'Haw' in this sense is derived from the Old Norse word haugr which also means hill. When the Domesday Book was compiled, Rawdon, Horsforth & Yeadon were surveyed as Terra Regis - land owned by the king.

Historically a part of the West Riding of Yorkshire, Yeadon was a clothing and mill town in the 19th century. It had a cattle fair every year on the first Monday in April and the Yeadon Feast in the third week of August, which was held on Albert Square at the top of the High Street. The fair continued until the early 1980s, when housing for the elderly was built on the site.

The former Yorkshire and England cricket captain Brian Close lived in the town during his childhood.

In chronostratigraphy, the British sub-stage of the Carboniferous period, the 'Yeadonian' derives its name from the study of a geological site at the brick and tile works in Yeadon

Yeadon is a town within the City of Leeds metropolitan borough, in West Yorkshire. It is home to Leeds Bradford International Airport. 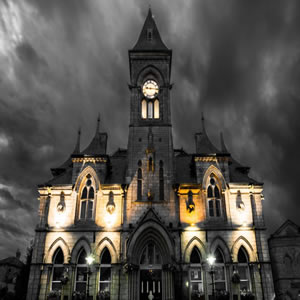